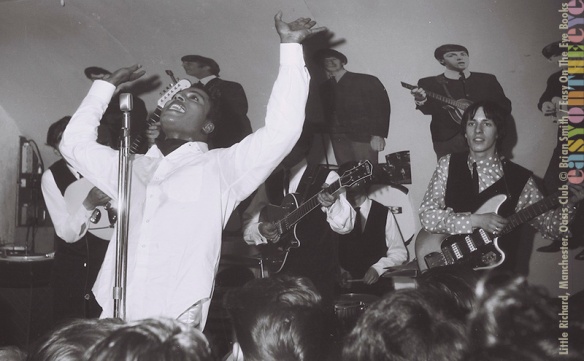 Just a few days on from bemoaning the death of Millie, a proper pop star, than another of the acts Brian Smith photographed in the Sixties passes away, this time a proper rock and roll trailblazer, Little Richard.  Brian was lucky enough to catch a performance at one of Manchester’s most famous venues of the time, The Oasis Club, in 1964.  Just seeing his pictures makes you jealous, as Richard seems in amazing form while the crowd are in awe judging by some of their expressions. Local group The Dakotas got to back him, all under the shadow of a huge Beatles mural decorating the back of the stage.  Which is a tad ironic given how much they owed to Richard amongst others!  Brian also caught the filming of Little Richard by Granada TV for one of their highly regarded pop specials of the time.

This great shot from the Oasis shows Little Richard working the crowd at the height of his set, and would have made the final selection for the book of Brian’s pics we’re wrapping up – except some of the others are even better!

Richard leaves a musical legacy only a few could equal even back in the Sixties, but his contributions to rock music’s development are unlikely ever to be surpassed in the future.