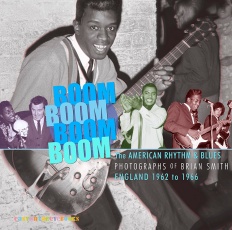 Easy On The Eye Books have been busy planning our schedule for 2018 and our next three releases are now being ‘sold in’ to book shops by our distributors.  The plan is to issue Boom Boom Boom Boom – The Blues Photos of Brian Smith first.  This title brings to print for the first time many of Brian’s wonderful photos taken mostly in Manchester in the early Sixties.  He was the official photographer for the pioneering fanzine R’n B Scene, and covered many visiting American blues artists such as Little Richard, Howling Wolf, Johnny ‘Guitar’ Watson, John Lee Hooker and dozens more.  You can read more about the title on the site, and subscribe to a newsletter to get advance information when it goes to print. Brian also unwittingly covered the start of the Northern Soul scene at the famous Twisted Wheel club in Manchester, many of the acts being promoted by Roger Eagle.

The next title is Yes – Time & A Word – The Interviews, a remarkable collection of interviews by DJ John Kirkman. Jon has spoken to almost every member of the band past and present, and together these interviews shed interesting light on the band’s history, how the musicians viewed their fellow musicians, the solo projects and much more.  The interviews have only been available before in a large format limited edition book sold only through mail-order, but will now be available in a more affordable edition on general sale.  The book will be illustrated throughout with photographs and memorabilia old and new.

Finally comes the much anticipated Deep Purple – Fire In The Sky, the Story of Machine Head and Smoke On The Water.  This follows our very popular Deep Purple book Wait For The Ricochet, now in it’s second edition. Fire In The Sky tackles the group’s most famous album in the same fascinating detail, looking at the build up to the album sessions in Montreux in late 1971, the astonishing trials and tribulations (and fires!) which beset the band once in Switzerland, and then the subsequent tours leading to the late release of Smoke On The Water. This became their most famous track, and helped propel the band to the top of the American charts, selling over 12 million copies.  As before the book is chock full of great photographs, rare memorabilia, a gig list and discography.

Actual release dates will be posted here as soon as we have them, and news of book previews and other promotional material will be sent to people who subscribe to the individual newsletters for each title.

Easy On The Eye Books

Other Easy On The Eye sites